This essay was written for Centotto’s exhibition catalog that accompanied Marksmen and the Palimpsests, an interstizio exhibit by John Avelluto and Josh Willis that ran from November 5-December 17, 2010. 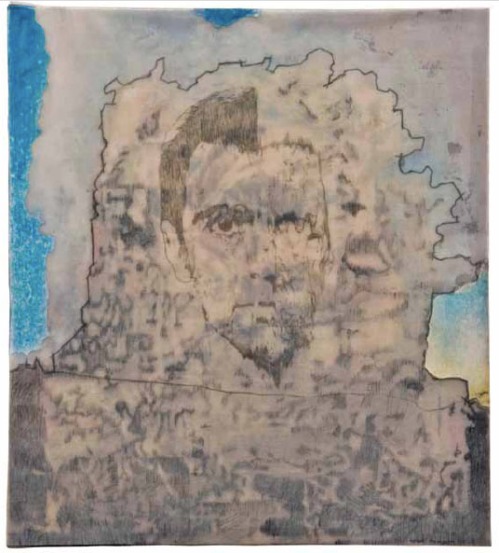 Palimpsests, created through a process in which one substance scrapes away and then covers another, simultaneously revealing and concealing aspects of both, are as old as the earth itself. Geological palimpsests, for example, can occur when sediment deposited by a glacier comes in such strong contact with oceanic tides that the glacier loses its own properties.1 About fifty to sixty million years ago, in what would one day be labeled North America, pressure from the depths of the earth pushed magma through layers of sedimentary rock, forming vertical striations that were later eroded away, revealing an enormous bulge in the landscape now known as Devils Tower, Wyoming.2 This process of destruction and rebuilding is as gradual as it is revelatory; shifting tectonic plates, dripping stalactites and drifting sea floors all demonstrate eons of deposited and scraped-away moments. Every layer is evidence of the perennial life force and self-reflexive creativity of nature. Such effects manifest themselves in human existence as well, in the constant ebb and flow of urban development encroaching upon these geologically processed forms, in the urban landscapes of cities that grow in fits and starts, in cobblestone and concrete.

The term palimpsest is derived from a Greek verb meaning ‘to rub again.’ With regard to manmade objects, it most frequently describes a manuscript that has been reused after an original text was erased. Pages of manuscripts, the forerunners of modern books, were generally made from parchment, a smooth, sturdy writing surface made of animal skin. Medieval scribes wrote with a quill pen in one hand and a knife in the other for scraping away mistakes.3

Because making vellum was a costly and time consuming process, recycling of these precious sheets was a widespread practice. Countless manuscripts were washed or scraped of their original text and reused. In addition to financial and material practicalities, societal shifts also precipitated the creation of palimpsests. Texts that were deemed outdated were destroyed in favor of new ones that reflected current liturgical or legal information. Deciphering the content of these palimpsests offers scholars information about the shifting values in society and has even brought to light texts that were thought to be extinct. For instance, a lost section of Cicero’s late fourth- or early fifth-century De re publica was found beneath a seventh-century copy of Saint Augustine’s writings on the Psalms.4 Pagan Cicero had been subsumed by Christian Augustine on the page, a telling parallel to the political rise of the church over minority religions in the middle ages.

Nineteenth-century attempts by Italian archbishop and philologist, Angelo Mai, used a chemical process to decipher the double messages of palimpsests such as this on vellum, permanently damaging the objects.5 Palimpsests are still so essential to manuscript studies that the Vatican Library’s photographic services have developed two scanners with custom software to capture palimpsests by using both RGB and UV imaging in order to “isolate and extrapolate the various levels of script.”6 Other scholars have taken an archaeological approach to deciphering such texts, attempting to preserve both layers while excavating them. Johan Ludvig Heiberg used a mere magnifying glass in 1906 to recover mathematical writings by Archimedes, hidden beneath the text of a thirteenth-century Byzantine prayer book, that were no longer extant in any other form.7

Scientists and art historians have long approached the hidden layers of art as a treasure to be unearthed by technology, a secret to be revealed despite the best efforts of the artist. In paintings, for instance, X-ray analysis of underdrawings gives art historians an opportunity to analyze an artist’s intentions; if something has changed from sketch to final painting, it is presumed to be an intentional and pointed act of the artist. Tintoretto’s horizontal Nativity, for instance, was considered a sub-par example of his work until X-rays led conservators to believe the haphazard composition began as a vertical Crucifixion altarpiece that had been abandoned.8 Rather than a sloppy application of the principles of design, the finished painting evidences a clever reuse of materials. Recent technology has also revealed that Leonardo da Vinci’s sfumato finish on the Mona Lisa, for example, is enhanced by the thirty or forty hairlinewidth layers of varnish that he patiently built up to imbue her presence with hazy, dreamy qualities.9

Without doubt, Willis and Avelluto are not the first artists to intuit that even the most hidden layers of pigment or varnish imbue the art with a richer, more nuanced finish. It is pertinent, then, to note that Avelluto and Willis make no attempt to recover the sacrificed information in the layers of their own work or in their collaborations, as evidenced by Palimpsests, the collaborative series they produced for this exhibit. Instead, both artists are process-driven and utilize visual repetition and deconstruction, though to widely different effects. Willis’ work begins with introspection. Much of what he does adds nuance to the final piece but is not on display for a third party. Avelluto also has a painstaking and hidden methodology for building objects, but he has a more direct message for the viewer. He reflects on nostalgia and refuses to take an everyday object, even a mere sheet of notebook paper, for granted, treating it as an object for exploration, deconstructing its material and visual elements. Avelluto’s nostalgic concern for information as a concept is juxtaposed with the historical precedents and social awareness resting on Willis’ consciousness. 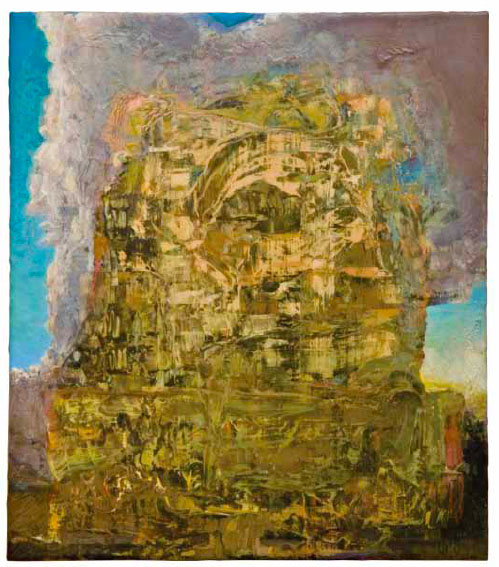 Josh Willis’ painting series, Towers, features monolithic forms confined to small canvases. It is his interpretation of, among other things, the igneous formation of Devils Tower. Each painting’s unabashedly straightforward presence belies the struggle required to bring it to completion. He begins a painting with thick planes of Cezanne-like brushstrokes in vivid colors, only to partially scrape them off, piling on layer after layer in this process until earth tones and energy emerge. Background skyscapes feature contrasting blues that tap into the pieces’ emotional undercurrent with naturalistic clouds or gritty, storm-like impressions. Willis recycles and reinvents his brushsrokes in a stubbornly regimented process until the end result is one from which he might derive a personally relevant lesson or insight. This self-inflicted iconoclasm is a lesson that forces him to reflect on social struggles in the vein of Courbet, or on the concept of communication and message—his Devils Tower depictions are a reference to Bruegel’s biblical Tower of Babel as well as a study in nature’s processes. This series is a testament to art history as well as to personal experiences. 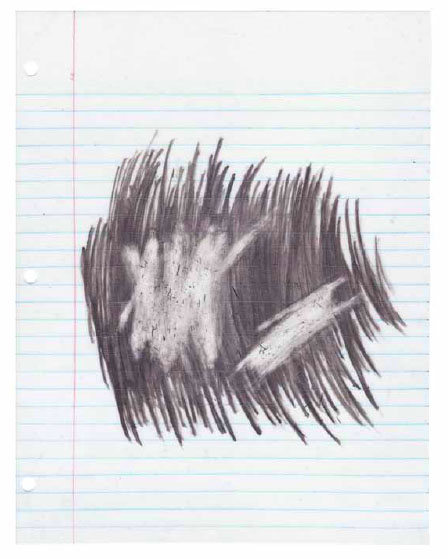 John Avelluto’s work appears straightforward, but that is indeed an appearance. Upon close examination, one begins to see it in a very different way as it forces the viewer to ponder reality and philosophy in order to reconfigure its logic and meaning. He uses layers of paint to make objects, (in this exhibition, pieces of notebook paper), blurring the line between painting and sculpture, forcing the attentive viewer to question perception via his products that both reference nineteenth-century trompe l’oeil decoration and update it through insightful critiques of the so-called digital age of information. His repeated representations of paper completely deconstruct the formal elements of the page, and his copies with rearranged lines and holes are, in Avelluto’s words, new “streams of creative energy,” new iterations of an object that is often dismissed as a means of recording mundane data, a part of everyday clutter.10 His meticulous process of layering paint and building up a variety of simulated objects (paper, pencil marks, erasings) from a single material is consumed by the straightforward, representational result. Partly as a result of developing this process, Avelluto stresses the importance of acknowledging and deciphering palimpsests across media as a way of pondering the constant rewriting of information in our society.

The cohesiveness of Marksmen and the Palimpsests lies in the ways in which both artists question presentation, form, and representation in a quest to define and utilize process. Process is not the end result, however. Ultimately, in each artist’s series of paintings, one finds a form reminiscent of a familiar object or place, but the significance of that form is that the path leading the artists there was the road less traveled—one of work and loss of work. For the viewer, it is a glimpse into the force and nuance of creativity, of questioning the most basic objects and acknowledging the significance of origin, of research, of context, and of presentation, both revealing and concealing aspects of the artists’ messages.

The two artists live and work in close contact with one another. Willis calls this a type of “cross-pollination,” and despite obvious stylistic differences in their work, the artists manifest similarities in terms of meticulous processes and goals. However, Willis also points out that a tangible, physical overlap in the art itself highlights the differences in their work. Therein lies the value of Palimpsests: it is an invitation to both viewer and artist to question and process visual information in all possible ways, to appreciate the inherent cycles of creation, to find new information in the repetition of a familiar object or practice, and to make the creative process a conversation rather than a monologue.

10 Avelluto’s and Willis’ personal comments were recorded during studio visits with both artists in Bay Ridge, Brooklyn, August 2010.