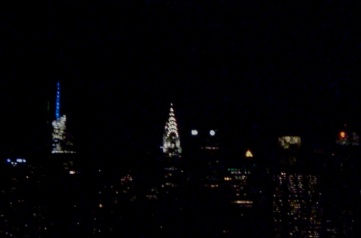 Around where an Associated Supermarket on Seneca Avenue sits cater-corner from a public school playing pitch in the hilltop heart of Ridgewood – a rather borough-resistant, historically pseudo-sovereign neighborhood I have described elsewhere as “yonder-Bushwick, nether-Queens, soft-hilled and arboreally charmed” – one alights upon a truly stunning view of the Manhattan skyline soaring up over the far end of the field, providing what must be, for those who play there, a dramatic backdrop to something as relatively mundane as baseball practice, for example, or a soccer scrimmage, or flying a kite. At the same time, this panoramic spot might only seem so momentous for visitors passing by; for locals, its mundanity might be far greater compared to the setting’s various activities it rises behind. Nonetheless, if this is not your everyday sight, it is certainly well worth a visit – even on, or perhaps especially on a most frigid winter night, when the clarity of cold seems to encourage the city’s familiar lights to shine a little bit brighter than usual, as if they too must do something to keep warm. 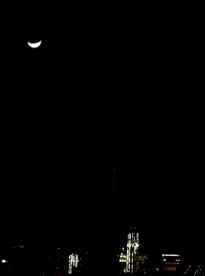 Apropos of locals, nestled a few blocks down the street from this vista is Valentine Gallery, directed by artist and curator Fred Valentine, where the current exhibit, a two-artist show of works by Rick Briggs and Adam Simon, might be likened to a satisfying main course for which the above treat would make a fitting appetizer or dessert.

In the gallery’s main room are new works by Briggs, paintings whose generally subdued palette and variably painterly self-reflexivity read like demurred witticisms writ, with great ease of depiction, large. Take, for example – if not perhaps with all too great ease of exemplarity – Brown Roller, in which the self-awareness of creative agency is portrayed not through portraiture or canvas-bound act of creativity, but rather, and far more tellingly, through the portrayal of a lone man in an essentially empty room, his back turned to the viewer with slack and indifference as he toils away with a long-armed roller to light-brown-wash a very plain wall.

Workaday enough is the wit therein, one might say, but Briggs’ one-liner-like commentary can also be more curiously curvilinear. For here he deepens by at least a layer the portrayal of painter-cum-house-painter in the bored throes of going through motions by inverting the understood utility of the roller, its flat-tending intentionality amusingly upended in columns of oblong-stamped – indeed, and in deed, almost terrifyingly spreadsheet-like – traces of itself, exposing for a moment the formal quality of brushstroke as counter-functionality of form. 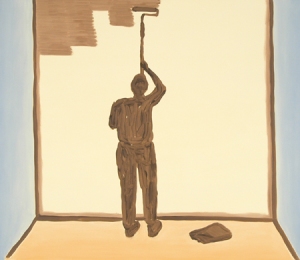 Or something like that. One can ponder this one forever – from living room to studio, from cubicle to cave with so much Plato, et al, in between. Of course, one might elect to seek out similarly winking wit elsewhere in the gallery instead, for there is plenty to take in and enjoy. Briggs’ humor elicits cracked smiles with crossed arms, not knee-slaps and guffaws, and his paintings are thereby engaging and engagingly placating. 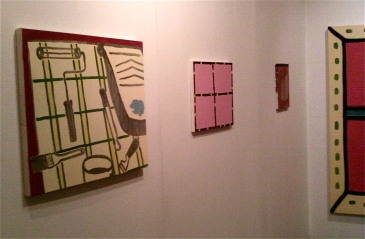 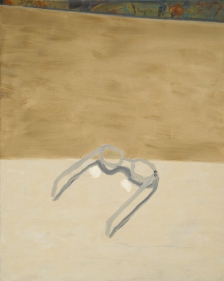 At the same time, don’t be surprised if you’re occasionally blinded by bright flashes of yellow or red, or if a small painting of spectacles on a table draws you in, with particular intimacy, until you note the softly undulating brushstrokes follicularly incised into a swath of backdropped taupe.

Now back up. Touch chin.

Or, if you will, exit stage left, for there you will find an exquisite series of works by Adam Simon, one large painting and a suite of somewhat spare yet deeply shadowy, fundamentally transfiguring – not to mention technically transfigural, for they portray figures transferred several times over – drawings. 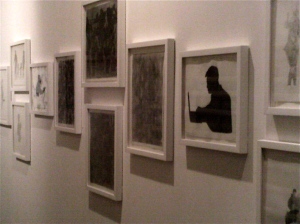 Much more ramification of than departure from his oeuvre proper, which consists mostly of paintings (the process and content of which my cohort here at After Vasari, A.L. McMichael, has already described with abundant meticulousness and grace), these new works, executed in variable strata of graphite dust, exude a lingering aura that lures and lurks. In their now crisp, now blurred lines and errant streaks, these transfers of composite images, though largely devoid of details, bring to mind early photographic images à la Daguerre. In fact, given that Simon culls his characters’ delineations from stock photography, one might even see these renderings as a collection of post-photographic fossils impressed, beneath the amber of fixatif, into paper. 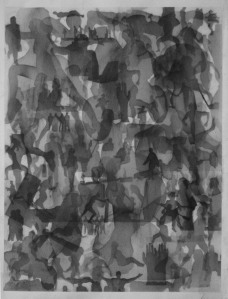 Or something, once more, like that. These works also beg further pondering. Yet given their number and gathered display, one needn’t move around too much to linger in the midst of their enigmatic looming, one need only stir ever so barely their still air of mystery and spectral allure. Upon close enough engagement, moreover, one might well be led to wonder, having dined on the entire exhibit, what sort of fare a phantasm like Waiter might lean forth to offer. 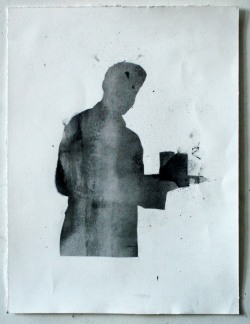 Let us assume – for metaphorical convenience, if not also for presumable gastronomic propriety – that his proposed provisions relate to dessert.

And now let me step into his shoes as I offer you two further exhibitional curiosities to ponder, followed by a sweet visit-ending treat to savor.

Curiosity #1: Where Briggs’ Brown Roller might be likened to a brush-rendered apotheosis of the form of a paint roller, Simon’s works suggest temporary paint-roller apostasy. Rollers are among the primary tools Simon deploys for his paintings, that is, yet here, for his drawings, he abandons them.

Curiosity #2: Where Briggs portrays and probes quotidianity with an eye for and vein of humor, Simon explores the mundane and disrobes it to reveal an underlying stillness of whispery horror. 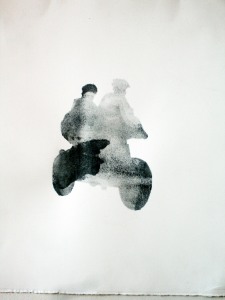 And now that we’ve come full circle from the arguable mundanity of a skyline view to the variably captivating quotidianities on display at Valentine, I recommend you make yet another stage-left exit while still at the gallery. Into the gift shop, that is, where you will find, among a great many other artworks, a few very nice, and here very neatly relevant, skyscapes by Kerry Law. You will recognize that spire, no doubt. And once you’re familiar with that nearby panorama, you might well guess in which neighborhood the artist lives.

One of several 12"x12" skyline glimpses by Kerry Law in the gift shop at Valentine. Photo courtesy Valentine.

Take that in as dessert. And if you then head over to the spot on Seneca to behold a shimmery, perhaps dramatic sight, you might consider that vast view the digestivo rounding off your repast.

A bit of Fernet Branca as vista, for instance. Rather bracing like the chill of night. Or if you want to try one of my favorites, have some Cynar, Ramazzotti or Averna in a lowball tumbler filled to the brim with crushed ice.

But now full circle has forayed into fully changed topic.

Which is for me, to wit, absolutely mundane. 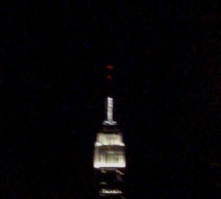 The exhibit of artworks by Rick Briggs & Adam Simon will remain on view at Valentine through 5 February 2012. For more information and visiting hours, see the gallery’s website.