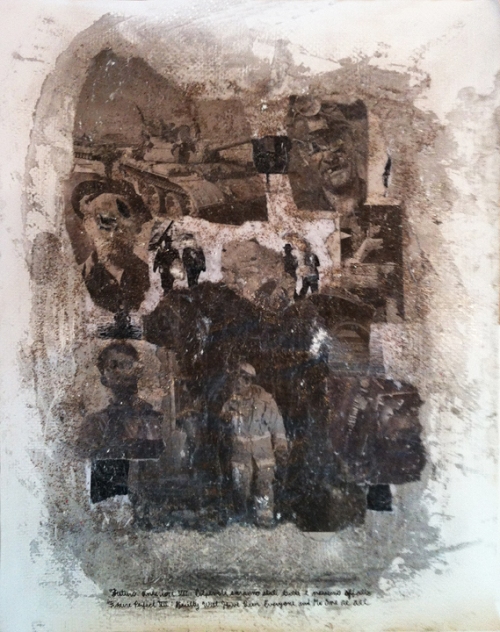 Futuro anteriore VII: Colpevoli saranno stati tutti e nessuno affatto / Future Perfect VII: Guilty Will Have Been Everyone and No One At All. Mixed-media collage with ink and acrylic mediums on gessoed paper, 2012. Private collection.

“‘The masses are rushing, running,
charging through the age. They think
they are advancing, but they are simply
running on the spot and falling into the
void, that is all,’ observed Kafka.”³

Analogously circular, the pits of
citation.*

Nota bene: Feeling that the above verses were already lexico-textually indulgent enough for one post, I had opted not to include an additional note about the intriguing—at least in my mind—coincidence that led me to write them. But then a message I received from my cohort here, A.L. McMichael, led me to reconsider that decision.

Thusly did the coincidence play out:

The first lines of Chapter 5 of Virilio’s above-cited The Information Bomb are as follows: “‘The war years do not seem like real years…. They were a nightmare in which reality stopped,’ wrote Agatha Christie not so very long ago.”

Indeed, Virilio opens the chapter with a quote, an at least mildly chilling one at that. What’s more, he does so with a quote from an author whose works I do not often find cited, then proceeds in subsequent pages to cite authors whose works I know much better and find cited with at least relative frequency. That in itself is neither coincidental nor noteworthy, to be sure; that is, that Virilio’s citational opening and further paraphrasing and quoting might have been the impetus for me to compose a few inherently disposable verses—ouroborically self-consuming in their tautologized knot, those verses exist ever-stuck in the act of self-disposing—about, essentially, quotes, follows a logic that is linear enough.

The deeper layer in all this that made my encounter with Virilio’s citation of Agatha Christie so momentous—again, at least in my mind—was that it occurred almost precisely 24 hours after a previous, and quite similarly unexpected, encounter with the works of the same author. For two mornings ago (on the morning of 23 March 2012, that is), while reading the current issue of The Atlantic (April 2012) and arriving at a series of five rather brief book reviews (pp. 94-95), I found it notable that two of the brief reviews were of recently reissued editions of books first published decades ago, and both by the same writer, Agatha Christie. That doubled-up reminder of the author might have been enough to keep her name fresh in my mind, but what made me take more mental note was that I’d thought, after reading both reviews, how much I’d like to read both of the books mentioned therein. Admittedly, and perhaps inexcusably, I’ve never felt eager, or at least not irresistibly compelled, to delve into Christie’s oeuvre proper. These volumes, however, fall outside of it to some extent and seem promisingly full of different sorts of mysteries and surprises. For instance, one review notes that in Agatha Christie: An Autobiography, one finds a wealth of details related to how she derived plots and characters—yet absolutely no mention of what is considered her “famous 11-day disappearance in 1926”; the other review appraises very favorably Come, Tell Me How You Live: An Archaeological Memoir, in which Christie recounts experiences from her yearly trips to Syria in the 1930s with her husband, Sir Max Mallowan, who traveled there regularly for archaeological digs, all of which conjures a romantically placid, genteel aura of a nation that is currently in the tumult of self-destructive—though perhaps eventually self-renewing, unlikely though it still seems—violence.

I clearly dug into those reviews enough to plan to perhaps eventually dig into those books as well, so my brain was prepared to react synaptically when I encountered her name again 24 hours later in quite a different source—and sitting in precisely the same chair at the kitchen counter, no less, and with that issue of The Atlantic still right there as well. Also of note, of course, is the precise source of Virilio’s quote: the first edition of Agatha Christie: An Autobiography, which was initially published in 1977.

That happens to be the same year a certain yours truly was also issued (to the variable detriment of others).

All the same, as stated above, I had considered including something about all this in the post, only to then decide not to bother. It’s not all that coincidental, I figured, and it would perhaps be of little interest to anyone else. Furthermore, I note these types of lexical coincidences far too often to describe them every time, though each instance compels me to somehow do so.

But then I sent A.L. a brief note last night telling her I’d prepared a new Schizzo for the blog, and asking her to have a look at it before I posted it today. I mentioned nothing regarding the Agatha Christie encounters detailed above.

She replied at some late hour last night, but I only saw it early this afternoon. Therein she said the following: “That’s the second Ray Bradbury reference I’ve seen in two days. Is this a sign that I should be reading Fahrenheit 451 or not writing on lined paper or something?”

‘Perhaps,’ I thought, but I replied differently. “Funny you should bring up multiple encounters with an unlikely author. That’s exactly how I ended up writing that piece, though Bradbury wasn’t the unlikely one. It was, instead, someone quite different. I thought about adding an indulgent note at the end describing it, but then I thought it wasn’t necessary. Now I know it’s in fact necessary, so I’ll add that before posting.”

Necessary, at any rate, to round things off. To be thorough. To bring things, in a manner quite different from that implied in the verses above—or maybe not so different at all, depending on how any of this is eventually read—full circle. Additionally, A.L’s reference to that particular work by Bradbury also conjures imagery related to my collage featured above.

If nothing else, and if only to conclude, this ancillary recounting of coincidences and the like dovetails nicely with something Christie writes in her Mesopotamian memoirs regarding why she made such an effort to compose them. She did so (as quoted, of course in The Atlantic) “to remember that there were such days and such places.”

And such delight to be had in reading and writing.

In recounting and recalling.