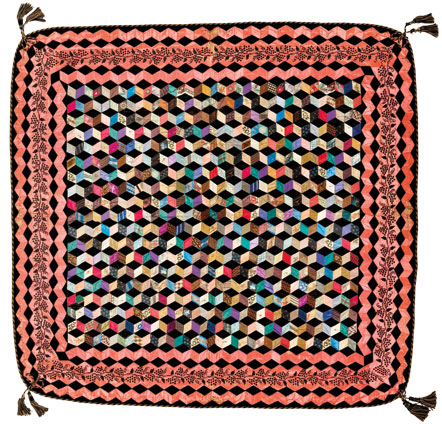 Editors’ note: Writings on After Vasari bearing the Juxtaposition heading examine the unexpected placement of one object or experience alongside another, offering new avenues for contemplation.

Two curatorial narratives, examined in tandem at the Brooklyn Museum on a summer afternoon, struck me as unlikely counterpoints.* Multi-media sculptures by Ghanaian artist El Anatsui invite exuberant ramblers through the metal, paper, and wood that compose Gravity and Grace. Their quieter neighbors, an exhibition of historical quilts called, “Workt by Hand,” are textiles–dimly lit by necessity, static in their familiar materials, such as thread and cotton, tassels and embroidery–that inevitably produce a softer visual impact.

But both kinds of work are by artists who gleaned leftovers and scraps and handcrafted them into flat sheets that are animated by use: Anatsui’s as rippling, winding sculptures; and the quilters’ as a specific kind of cover, structured by the walls from which they hang or the pieces of furniture over which they are draped.

A quilt’s quality can only be assessed from a close viewing. Durable hand stitching and embroidery create a subtle dimensionality from malleable fabrics. By nature, a quilt is an assemblage of fabric tesserae. Its structural complexity is a close cousin to Anatsui’s minute wires, threading metal ribbons into a chain-link net in Gli (Wall).

The museum describes Anatsui’s work, fabricated from bottle caps and aluminum cans, among other common materials, as “textured hangings that take on radically new shapes with each installation.” That the pieces can be uniquely site-specific at an infinite number of locations is unusual. But the traditional quilters were radical in their own ways.

With the popularity of the Quilts of Gee’s Bend over the last decade, viewers intuit that every quilt is pieced together with a wealth of social data, including undercurrents of labor, domestic activity, and the nebulous (and often meaningless) line diving art and craft. Curator Catherine Morris expressly acknowledges this in the Brooklyn exhibition by incorporating “Hidden Labor” into the title. Hand-stitched objects exude not just charm but dignity, subtle commentaries on participation within exclusionary systems. A collectively-made pictorial quilt from the 1840s sports Freemason imagery in one square, supporting an organization that didn’t allow female members. A whole-cloth toile example with portraits of American presidents was produced long before women were granted the right to vote. While humble examples might be pieced together from household clothing scraps, the presence of quilts at county fairs and over beds emphasizes adaptability and a range of conditions in their use and display over the course of centuries.

On a larger scale, quilts’ associations with humble materials coupled with craftsmanship invite conversations on physical labor and material goods. Art historian Maggie Williams recently reflected on Vik Muniz’s work with the “pickers” of Buenos Ares who sort through trash for items to recycle; she muses over Muniz’s collages and the humanity that emerges from the reuse of throw-away objects into messages and portraits. Williams notes the “essential social and environmental purpose” of gleaners in urban communities, who are often ahead of the activist curve. My thoughts wandered from her examples to Millet’s The Gleaners and Courbet’s The Stonebreakers, casting a wider net over labor and value toward Post-Impressionist social commentary.

Susan Vogel, a scholar of African art, commented to Anatsui in an interview that if he were from Venice, there would be inevitable comparisons between his work and the Byzantine mosaics there. Instead, he is simultaneously African and a participant in the international contemporary art world. His sculptures, reshaped during every installation, are far from the grounded scenes in ancient mosaics. The anticipated noise of clanking pieces, the sharp edges of twisted wires, the unruliness of waves of aluminum discs recall the recent past lives of the appropriated materials.

Quilting is often thought of as women’s work, but its impulse toward collecting and assembling objects and ideas in a logical manner is the driving force behind creativity in many forms. Both exhibitions offer fodder for musings on use and reuse. They confront the roles of display and daily use as attributes with potential to elevate or reinvent objects in their roles as art and craft. Together, these exhibitions highlight the genderlessness of assemblage and expression.

*Both exhibitions are on view at the Brooklyn Museum. Gravity and Grace: Monumental Works by El Anatsui has been extended through August 18, 2013. “Workt by Hand”: Hidden Labor and Historical Quilts is organized by the Elizabeth A. Sackler Center for Feminist Art and closes September 15, 2013.

Click here to watch a short video of the installation of El Anatsui’s sculptures in the Brooklyn Museum.