Robustly chromatic, visually potent, at times compositionally labyrinthine and physically imposing, Rico Gatson’s mixed-media paintings, sculptures and collage-centric drawings are always, thanks in part to their carefully honed economy of forms and means, declarative, assertive and indelible—and unmistakably, unwaveringly his. On levels aesthetic and conceptual alike, Gatson does not imbue, but rather inundates his works with definitive, invariable force, executing them with just enough colorful vibrancy, linear keenness and mystical curiosity as to allow his viewers to almost—yet only almost, and this is crucial—miss or overlook their certainly important, equally cogent, subtly layered, variably strident socio-political content.

All of this has been true of Gatson’s work for quite a while, but it is now much more so in the new series of mixed-media pieces he has produced for Power Lines, a solo exhibition at Samsøn Projects. The artist’s characteristic palette of patently Africana-associative chromatics—bright reds, greens and goldish yellows often framed, interrupted by or sectioned off with swaths of deeply flat or slightly lustrous blacks, all arranged in variable abstractions that might even, at times, feature embedded texts—has become bolder, brighter, richer and punchier than ever, and thicker sections of color and black alike make his compositions register as weightier, more declarative, somehow exigent. Some pieces, however, especially a fresh new series of small panels, as well as certain tall, lean-to like sculptural works, Panel Paintings, evidence Gatson taking a bit further his recent explorations of chromatic switchings—transposing the complementary balancing he usually achieves via reds and greens with value-like harmonies via purples and greys, maintaining his lush warm yellow to keep the violets at bay.

Gatson’s recent boundary-breaching explorations hardly stop at color swaps, however, and it is in some of his newest compositional tweakings that viewers are reminded to look very deeply into the information he’s providing to extract therefrom certain latent, open-endedly abstract statements regarding contemporary race relations. What does a small panel covered in colorful dots mean, for instance, when it’s formally disrupted by a veil of orderly black lines from one end to the other? In the artist’s series of ‘fun-looking’ Panel Paintings, what might it mean for so many Africana-colored pieces to be ‘infringed upon’ by one that is simply, and thus in some sense openly, black and white? Such compositional and installation-related choices bring viewers into more intimate closeness with the objects in question, for certain, encouraging them to decode those featuring formally obscured texts, for instance, or inlaid images. But are viewers looking at them enough to look into them? Are they really, on a certain level, reading them? This is indeed the self-reflexive crux of the matter in Power Lines: Are we truly and honestly—as viewers of art, or as a populace with presumed awarenesses—reading the racially relevant signs that are all around us? Within the context of Gatson’s work, are we actually reading, for instance, the collaged bits of generally civil-rights-era imagery he has been inserting with increasing pervasiveness across his œuvre? Are we pausing to consider that the ever-bright colors in his paintings are achieved with simple domestic paints, thus making their presence an oft-overlooked omnipresence, and granting their flatness not just visual frankness but also critical candor?

Gatson’s chromatico-formalisms are more blatant than ever in Power Lines, and the blatancy, boldness and volume of his sociocultural critique is markedly amped up. The artist has long posited his work as a platform for discussions of racial inequalities, and his voicings of the same, in his new body of work, now have notes of stridency. He now seems to be demanding for his work to be regarded as such. And now is a crucial time for us to regard it thusly, for these discussions have been heating up dramatically in so many places, on so many fronts. To be sure, the best way to cool the temperature of the debate would be to actually engage in it, actively and honestly. With Power Lines, Gatson seems to be putting himself forth as a moderator.

In the context of all this, then, it becomes very intriguing to take a closer look at the series of Radiant Icon collage-drawings that Gatson has been making for years and years, and of which he presents a new suite here. That is, in the context of Gatson’s recently amped-up volumes and greater formal overtness, it becomes clear that the artist has been waiting for these discussions to burst open for quite some time. In our faces all the while—now latent, now strident—have been his powerful, colorful, radiantly provocative lines. 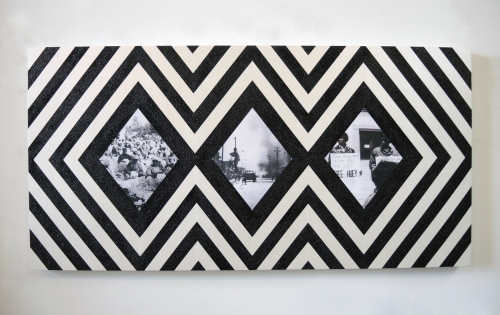 This essay was composed as an accompaniment to Power Lines, Gatson’s solo exhibition at Samsøn Projects in Boston, MA. The show opens on June 3rd and runs through July 17th, 2016. More information and images here.