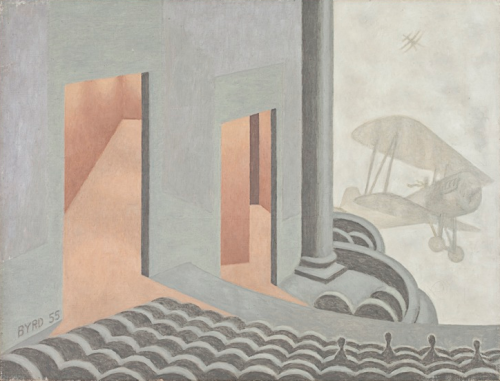 Flicks, Bouts, Blocks, curated on behalf of The David Byrd Estate in Sidney Center, NY, and hosted by Studio 10 Gallery in Brooklyn, features a chronologically and geographically particular selection of works in painting, drawing and sculpture by David Byrd, an as-yet lesser-known artist who passed away in 2013. Byrd’s personal story and, for so many decades, nearly ceaseless artistic activity form an inspiring testament to the unforeseeable turns one’s life might take, and to the many virtues of maintaining one’s creative drive.

Born in Springfield, Illinois, in 1926, and worker of all manner of odd jobs both before and after serving in the Merchant Marines and Army during World War II, then eventually finding fixed work as an orderly in the psychiatric ward at the Veterans Administration Medical Hospital in Montrose, New York, David Byrd lived a long, experientially rich, consistently difficult yet ultimately quietly, solitarily fulfilling life that made it neither easy nor obvious for him to even desire to express himself through art, much less become an almost astonishingly prolific artist. Yet artist he was, from his youth until his final days, and although he spent the vast majority of his creative years working in obscurity, he did have occasion to savor a few moments of fame and success thanks to a suite of exhibitions that were mounted in the months prior to his passing. Intending to build on Byrd’s budding legacy by exposing his work to a much broader public is David Byrd: Ten Stops, a multi-venue, bicoastal sequence of ten variably themed exhibitions to be mounted between July 1st and September 30th, 2017.

The Brooklyn installment of this ambitious series of shows is Flicks, Bouts, Blocks, a set of works culled together not merely to familiarize a New York City audience with Byrd’s artistic practice, but also to suggest that his many years spent living in Brooklyn, for a time as an adolescent and later on as a young adult, might well have imbued his creative sensibilities in notable, enduring ways. Notes of captured happenstance, for instance, and almost theatrically staged settings—of neighborhood encounters, of acquaintances and strangers in the streets, and of movie-goers, cyclists and Coney Island locales—are everywhere to be found in his paintings produced during and long after his Brooklyn days. One sees such tendencies as well in his many drawings of boxers throwing blows and lovers embracing, and in his now quickly, now meticulously executed sketches of individuals or situations he seems to have simply found strangely intriguing or peculiar. Many of these aspects of Byrd’s early work remain readily identifiable throughout the rest of his œuvre.

Unlike the paintings and drawings in Flicks, Bouts, Blocks, the one sculpture in the show does not date back to Byrd’s time in Brooklyn. However, the piece does seem to imply a later contemplation of the borough’s characteristic front stoops that must have been of certain importance to the ever-curious young artist—given all the people-watching they facilitate, all the variably lit staging they furnish, and all the visual cues they provide for structural delineations and physical forms. Also included in the show is one of Byrd’s earliest paintings, a piece that dates back to the artist’s period of study under Amédée Ozenfant, a noted French painter whose insights and mentorship would prove to be lasting fonts of guidance and inspiration for Byrd. This held true even several decades later, well after he had retired from his job at the hospital and retreated to his hand-crafted home and studio in upstate New York. There, mostly alone and at quite a remove from quotidian interactions and conveniences, Byrd was finally able to devote all of his time and energy exclusively to art, his most reliable conduit for self-expression and creative zeal, and his long-trusted mode of palliative distraction from painful memories of the many challenges life had dealt him.

Nevertheless, Byrd did manage to reserve some time and energy for one of his other great enthusiasms: bottle-collecting. Indeed, the long bottled-up artist who kept so much of his existence and so many of his struggles under wraps was also an avid collector of bottles. A fine one of those is included in this show as well—it too, like Byrd himself now, uncorked. 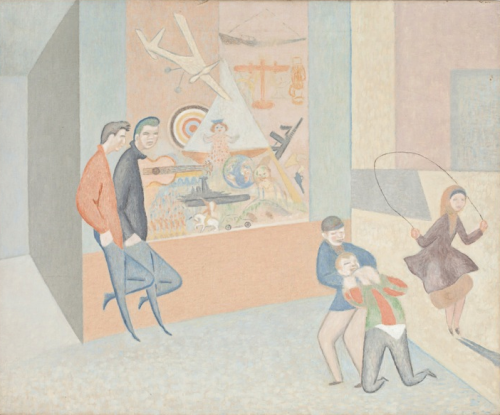 The above text is my essay for Flicks, Bouts, Blocks, an exhibition I curated at Studio 10 Gallery on behalf of The David Byrd Estate. It is on view from July 20th to August 6th, 2017. In addition to this exhibition, David Byrd: Ten Stops includes exhibits in Peekskill, Delhi, West Point, Franklin, Cooperstown and Seattle, as well as a large exhibit and a number of special gatherings at the seat of The David Byrd Estate in Sidney Center, New York. Detailed information and maps, along with a brief and charming video of the artist discussing his life and work around the time of its revelation to the public, can be found at www.davidbyrdestate.com.