Forth to Back: New Paintings by Marcy Rosenblat & Laura Newman

Forth to Back: New Paintings by Marcy Rosenblat & Laura Newman

It’s not exactly never that a somewhat strange, slightly surprising, perhaps apparently implausible or somehow a bit unlikely juxtaposition of one painter’s recent paintings with those of another can reveal, in rather indirect ways, various facets of intrigue common to both bodies of work, opening up visual pathways for locating their similarities that might have been previously hard to see. It’s not exactly never, such a scenario, but it is surely rare. And it’s for just that reason that when pairings like these do, in certain sometimes, work out just right, the revelations and takeaways can be all the more rewarding. Such is the case with Forth to Back, an exhibition of recent paintings by Marcy Rosenblat and Laura Newman.

Some of the relatively obvious shared qualities between Rosenblat’s and Newman’s works include suggestive abstractions, deep procedural layerings, generally bold and occasionally soaringly bright palettes, and painterly problem-solving executed at a range of scales. Yet such commonalities can clearly lead to vastly different kinds of work. Indeed, these painters’ compositional arrangements are markedly different. Their chromatic harmonies are markedly different. Their variable energies — now latent, now active — are markedly different. The materiality of their marks is markedly different. Their overall moods, too, are so very different. Newman employs a great deal of linear structuring and demarcation to create variably identifiable forms and multiple depths of space, while Rosenblat’s forms and spaces diverge or cohere more according to contours, colors and patternings. Newman’s manners of mark-making are many and various and result in sometimes edgy, angular, brushy, even anxious qualities. Rosenblat’s modes of bringing forms into being with paint leave far less evident her painterly hand, often veiling if not ever-so-nearly obscuring the vicissitudinous, mediatory treatments that factor into her processes, their traces just barely apparent beneath her final surfaces.

All that said, what brings Newman’s and Rosenblat’s readily contrastable bodies of work into both visual and, in a sense, interactive confluence just happens to be right before your eyes, indeed in essentially the most right-before-your-eyes parts of their paintings: the foregrounds. For Newman, in a large painting called Tatters, the transparent-wall-like structural implications she achieves with dry-brushily striated black lines have agency not only because they create an apparatus for other scrawly black marks and colorful shreds and fragments to pend from, cling to and penetrate; they are also the marks that strike you first, then lure you into a little corner-nook of a space, which then pulls your act of viewing into the deeper reaches of the implied environment. By now you’re captivated — if not circumstantially captured, given those walls and your ‘placement’ in the nook — whilst peering at and into a washy, almost apparently insouciantly executed, varicolored surface. In a sense, compositional elements interact less with the area of the canvas, as it were, than they do with this foregrounded structure, a treatment common among a number of Newman’s works of more or less the same large size, such as Kites, Black Widow and Beach House. In her smaller works, foregrounds sometimes obscure much more or much less, washy areas define their own limits, and more frequent bare-linen backdrops differently vary and complicate depths of space. What all of these gripping works share, however, is that obstructions are there to be confronted, then transcended. 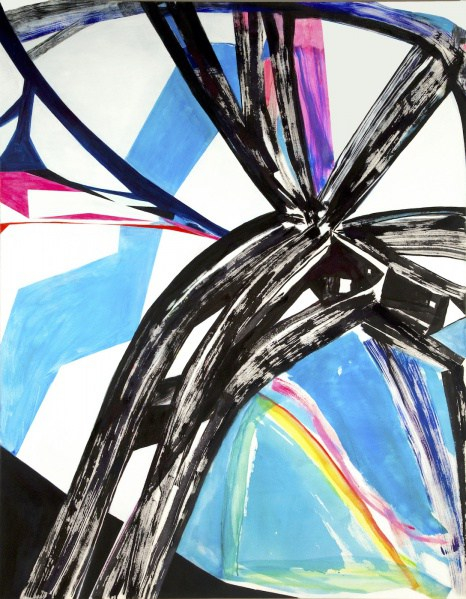 This kind of subjectification of the foreground, so to speak, or exploitation of forms and implied masses at the ostensible ‘front’ of a surface to provide a bold invitation into a work’s deeper reaches, has been a regular feature in Rosenblat’s paintings for quite a while. Different now, though, are the heightened delicacies in the artist’s use of sometimes crisp, sometimes blurrily whispery patternings, and the greater suggestive candor of her shapes that are now almost unabashedly, generously figural. In several of Rosenblat’s newest works, such as Wrap, Constitution, Ghost Shroud and Peggy G., busts, waists, hips and sometimes legs, all rather evenly implied, seem to surge forth with pictorial zoom and formal assertiveness, their finely patterned trappings pulling you physically close to discern if there’s any actual fabric involved, at which point you find yourself looking right into and through the forms themselves, peeking into the interstices of their elegant motifs to find a wealth of procedural traces behind and beneath them — previously indiscernible drawn lines, autonomous marks, embedded colors and patterned overlays. Now shallow, now deeply indeterminable, Rosenblat’s implied spaces seen behind, beside or through her curtainy, figural foregrounds are also the places where you finally find, among so much ambrosially chromatic, gossamery finery, the artist’s manual presence, her touch, her hand. All such aspects of these fresh new works — from their subjectified foregrounds to their objectified body parts, gracefully vibrant palettes, craft-referencing patternings, formal candor and ‘hidden hand’ — operate also as metaphorical vehicles for the artist’s thoughts about ‘feminine painting’ and feminist discourses in general. Quietly, maybe, or quite deliberately, Rosenblat’s sometimes overtly ‘female’ foregrounds come at you with definitive force — and perhaps a full agenda of matters of fairness, for instance, to discuss. It should go without saying that you should listen closely.

In a way, the conceptual crux of Forth to Back is a pairing of painters that seems, at first glance, less than likely, even slightly problematic, thereby demanding better viewing, more thoughtful scrutiny. These painters’ shared use of assertive foregrounds to beckon deeper looking and compositional reckoning, then, underscores that the not-exactly-never scenario mentioned above is, in this case, a marvelously effective, revelatory ‘certain sometime.’

So step right in — and forth and back — and find even more. There are surely other ways to contemplate this exhibition’s crux.

This essay was composed for the catalogue accompanying Forth to Back: New Paintings by Marcy Rosenblat & Laura Newman, an exhibition on view at 490 Atlantic Gallery from 5 May to 17 June, 2018. More information about the show can be found here. Images courtesy the artists and 490 Atlantic Gallery.